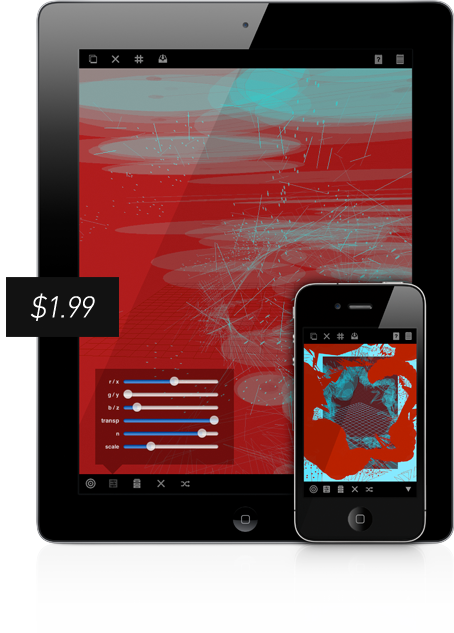 Instead of adopting traditional "brush" based drawing, SKTCH is about presets, created by a number of digital artists around the globe. Whether you decide to sketch circles, meshes, networks or use any of the 16 presets available, be inspired by the endless possibilities of generative sketches and compositions you are able to make using SKTCH.

Combine these with images taken by your camera, whether these be just background textures or more complex compositions. Modify parameters in realtime, combine presets and see your sketches evolve and take new shapes. See this flickr group for examples.

SKTCH is capable of unpredictable. Surprise yourself by least expected using the 16 presets at your disposal. Each preset works in a unique way allowing you to create amazing compositions.

16 Unique generative presets to draw both simple and complex sketches. Compose your sketches with images from your photo library for layered and more complex compositions.

SKTCH 2.0 allows you to browse through your compositions using 3D. Rotate around them and use x, y, z modifiers to deform your strokes in three dimensions - unique feature on the AppStore

New favorite drawing app! - ★★★★★
When I first started playing with it, I was thinking "Meh, pretty cool", but as soon as I started mixing presets and experimenting with multitouch this app instantly jumped to a whole new level of creativity. Can't wait to see more presets out of this but I'm more than satisfied with the ones it has now!

Brilliant! - ★★★★★
This App is a powerful generative tool for designers with seemingly endless possibilities for creating inspiring graphics. Architects, in particular, could find it an enjoyable and useful companion in the early stages of the design process. I look forward to the updates and to play with it on the iPad.

Worth Every Penny - ★★★★★
The title says it all. At first, I wasn't sure if I would like this app. I thought it would be just another one of those drawing apps but I was wrong. From experimenting with the presets to changing the colors to adding a custom background, I knew that this was a unique app that had a lot of potential. I want to thank the developer or developers who made this app.

SQUARE - Simple square to get you started. Drag around the screen to see them multiply or adjust transparency to create fade effect. CIRCLE - Another simple object (similar to square). MESH - Generative mesh that connects line to previously drawn points creating a mesh style effect. Adjust the parameter to connect older points to reduce mesh extent. DEPTH AND WIDTH - Parameter created by Andres Müller, play or words, use options to set width between the letters. NETWORK - draw circles connected by centre points, size of the circle is defined by it's distance to previous point. Great preset for multitouch, creating some very unexpected but beautiful results. TRIANGLE draws beautiful generative triangles by connecting points emitted using particles. Thanks to Kim Asendorf for both ASENDORF and SIX POINTS unique presets to Kim's work. Adjust scale, span between the points and direction of pattern. JOCABOLA is a simple but beautiful preset playing with the circle resolution. Create triangles/squares/pentagons and much more. Brought to you by Eduard Prats Molner. FIREFLY also by Eduard, a particle driven preset using jocabola as the primary element. CROSS is a preset by Martin Fuchs (deffekt) allowing you to create crosses and alter their size and look. Wonderful blend of color as you draw them. KIEBITZ by Philip Whitfield (underdoeg), inspired by footprint of a bird draws amazing lines almost feeling three dimensional and last but not least two presets from Mike Tucker; PHASE a simple weave of lines and ORBIT galaxy like swarm effect.

All text and design is copyright ©2010 CreativeApplications.Net. All rights reserved. Website code by David Kaneda.